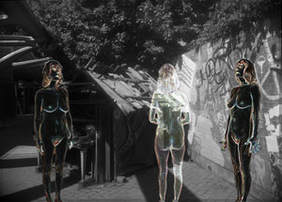 Over the years I have experiment with film and how I could use it. Some of the multiple exposures here were done on film, before PhotoShop. At one point I fell in love with color film (mainly negative film) and experimented with multiple exposures on the same frame using sharp-cut filters. I also experimented with multiple exposures using a figure moving through the frame or partially exposed in the same frame. Since color film has three emulsions it provided me with what proved to be a rather serendipitous experience. I never could be sure of what was on the film until I developed it!
Once PhotoShop appeared I began to work with it too. Many of these images are the result of working with film and PhotoShop. Some were shot on film, some digital, some glass.
These images are, in some instances, autobiographical. Some are expressions of thoughts and feeling that all humans have. I make no apology for them. In a way, my life is still experimental.