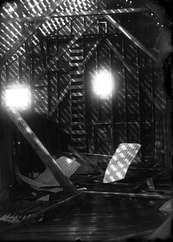 "After the Devastation" is a series that is still in progress.

It initially was concerned with the an old barn that had lost its roof and provided a venue where one could imagine what it once had been. The light was magnificent. Oriented as it is north and south the light changes during the entire day. In the morning the light comes from the East, in the afternoon from the West. You are viewing the first dry plate I did of the barn.
However, there needed to be a narrative. That meant it needed to have some human content too. The narrative quickly became concerned with what was and what might be—a really common theme for me.
​
What caused the devastation? Your interpretation is as good as mine. Quickly the series became about the resilience of  human beings. Beginning with a couple viewing the devastation and continuing to the birth of their children's children, it is intended to be hopeful.
​
Many of my common themes can be seen here. The figures all are nude. Seldom have I shown males nude, but human resilience doesn't work without the wonderful combination that males and females bring to life.